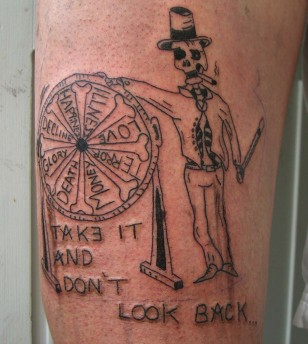 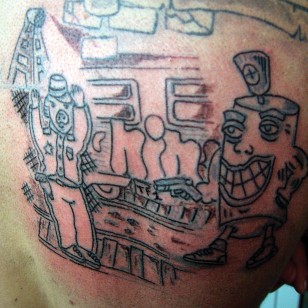 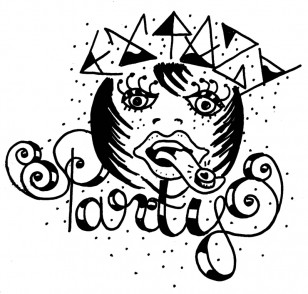 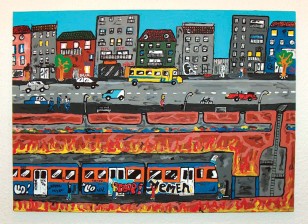 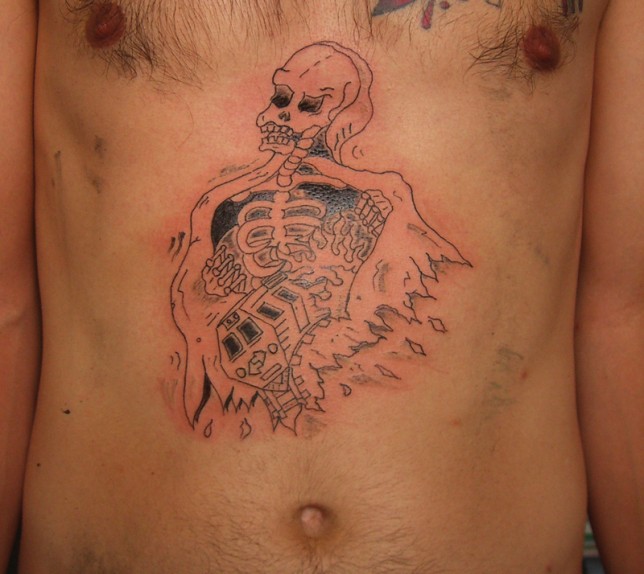 If you watched the news in France during the late 90’s, surely you heard about the UV-TPK because of their graffiti and their violence. If you haven’t - bad luck for you. The guy who likes big butt chicks with huge tits and doesn’t really like to loose at brawl will talk to us about his tattoos.

Fuzi aka Ignorant Stan, we know you to have traumatised the Parisian railway system during the 90’s with your crew the uv-tpk, can you tell us about an average day for you guys, back in the day?
– Okay let’s say that the first part of the day was kind of a work. In small gangs we painted a train or a subway in the morning, then went off to steal food, clothes, paint, etc. In the rush hour traffic of the afternoon, we’d take some flicks of the hit we had done in the morning. During the evening a big part of the crew began to hang out, smoke spliffs, drink, stroll and tag everywhere. We were free, without any constraints, Paris was ours and it was an adventure everyday. Yeah, and watch out, if you crossed our way! At the end of the day it was then time to go back to our beloved ghetto on the last train which we never forgot to destroy. Yeah, it was kind of hard work in those days!

And now, ten years after the beloved ghetto, what’s up?
– Well life caught up and the illusions are gone. Some of the old crew still paint subways, some hang canvases in exhibitions and others smoke spliffs. Personally I try to tame the wild animal within me and try to transfer the energy, which used to push me to do crazy things in the past, into my paintings, my tattoos or my poetry. I have no career plan, everything has happened naturally, I’m like a laborer and my miserable salary is the key to my liberty to be free in my art.

How did you start doing tattoos and where did you learn?
– The tattoo is part of my street culture and in the crew it was KISS who tattooed us. It happened in the middle of a hotel room full of ten guys smoking and drinking beer or sitting on his toilet seat. I like tattoos which have a story, a soul, I don’t give a shit if it’s perfect or not and I don’t want a photo-copy on the arm made by an art school guy! A prison tattoo or an image made with only a needle in the garage of a stranger will have much more beauty for me. At that time all I was thinking about was graffiti and I never thought that I would be tattooing one day, but after I slowed down with graff I started to learn how to tattoo by myself. I first bought a chinese machine on the internet and started to ink my legs and arms and legs of my friends. My friends wanted subways, trains and spray cans. They wouldn’t ask for these images from a rock dude with a ponytail who has no graff culture. It’s about the need to have a dirty tattoo made by a real guy and not the contrary. Then I can really get into it, sketching a lot mixing the old school tattoo with my ignorant graffiti style.

Black and white with a thin needle?
– More impact. It’s like a throw-up on a train, it’s only one line, you can’t cheat, you must have style. The thin needle is like an originial cap.

How do you work and what about the the hygiene, who are your clients?
– People contact me via mail. I live in Perpignan and that’s where I tattoo, on my kitchen table or in the guest room of my mother’s place. I only tattoo my own style. No tribal with me, only original Fuzi artwork. People come from all over Europe and they pass by before going onto Barcelona. Cheers for the interrail tickets! My needles are sterilised and for single use only. I don’t envy the regular studios, it’s them who envy me!

Your style is ignorant as you say.
– I like what’s real, which doesn’t get too heavy with techniques, trends or influences. A drawing of a kid, a lasered train’s bench or three dots tattooed on the hand – that’s what I call beauty. I call myself ignorant to mock the crowd of fashion tattoo artists who think they are gangster graffiti brats who bombs into art galleries and invents a past as a vandal. They are so many, i don’t waste my time hating them, I just ignore them.

What inspires you and what are your influences?
– I read a lot and educate myself without proper direction. I don’t force my tastes or my choices. I love a renaissance painting that will open a raw vision. I get inspired by everything and gonna mix everything and the opposite.

Tattoos are permanent marks that will travel on to the future, what do you try to fix in the skin of you clients?
– Honestly, i don’t give a damn about the permanent part of the thing. I don’t care much about the aesthetics of the body or where the piece should be placed. The ”It’s-for-ever-so-i-must-be-careful-speech” breaks my balls! I prefer the ”I-like-that-image, it-touches-me, tattoo-it”. There ain´t no need to think ten years about it, at the end our body will finish burned in a hole with its tattoos. As i said, I like what’s behind it, a story or a meeting, the impressions of a night which will stay in you more deep then the picture itself. And I’m conscious that the guy comes to ”offer his skin” etc… but i don’t make a holy thing of it. It’s a fun thing to do, that’s all.

Your favourite subject is the graffiti, what about this dark world made of manly and violent males surrounded by imploring women?
– Man, i told you, I don’t plan things, that’s life – tragedy, love power, laughter, crying. As they happened on trains or on paper, I tattoo them as well because that’s what we live as human beings. But I have to say it’s true that I like big butt chicks with huge tits and I don’t really like to loose at brawl.

Nowadays the rule seems to be ”who bombs, tattoos too”, what do you think about that?
– Nothing. I never thought that we were from the same graff world, so if they now tattoo it has nothing to do with me.

But showing what you do via internet is a foot on the scene, isn’t it?
– When I expose myself on internet, it is only on my blog, which I actually often cancel anyway. I’m not looking for gratitude from anyone, least of all from some tattoo artist. I show up an extremely small part of what I do and I’ve got a problem with that media. It might be coming from my past as a bomber: I like to expose my stuff but want to stay incognito, otherwise it’s often a big deception to discover who’s hiding behind a nickname or a work. I don’t feel i’m a ”tattoo artist” but an artist. I use the machine like I will use a pen or a bomb.

– It’s just a way to express myself, nothing more. The major part of tattoo artists are reproducing images over and over like a shoe maker fixes shoes. All they have in their hands is the technique that they keep secret, surfing on the myth of the bad tattooed guy and of the complicated science of tattooing. They just want to keep their grocer job for themselves. In short, If you want to learn, go on the internet, from the history to the material, it’s all on-line. Buy a machine and get done with it. I’ve got a secret golden rule: don’t do it like them.

I just have to ask a drug related question: why that flashy ”extazy party”?
– Cause I wanted to. •