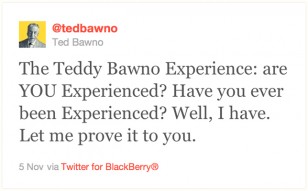 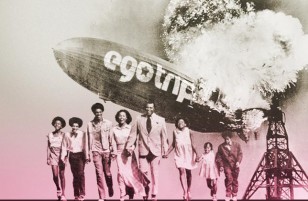 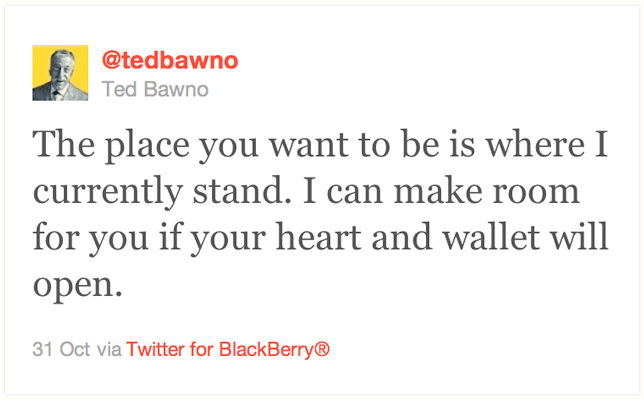 Ted Bawno is the not so silent benefactor of the greatest hiphop publication ever made, Egotrip Magazine and hit tv-shows like "Miss Rap Supreme" and "The White Rapper Show". Teddy even have his own movement called Bawnoism. Who can compete with that? Not us.

If you haven´t heard The name Theodore Aloysius Bawno before this is your wake up call. American industrialist and philanthropist Teddy B has acomplished more than the average man can in ten lifetimes. You don’t believe us? Check out his bio on the internets (everything you read about him is true).

Anyways, Teddy spared us some of his valuable time to talk about the rapgame, being the richest man on the planet, Bawnoism and alot of other important stuff.

For those who don’t know,who are you?
– I am Ted Bawno. A media mogul. A lover of women and a connoisseur of the finer things in life. I am old, rich and white, but I am also more hip hop than your average polar bear. I also firmly believe that the darker the berry the sweeter the bush, if you get my drift.

What is Bawnoism?
– Through my teachings (known the world over as Bawnoi$m) I civilize the uncivilized and enrich lives. We Bawnoi$t$ believe in financial freedom through the mental work ethic of a slave; we also believe that other non-Bawnoi$t$ should slave on behalf of Bawnoi$m, hence my rule that if you are indeed a Bawnoi$t you must forfeit 70 percent of your earnings to the Ministry. In exchange for that small fee you will enjoy the kind of bliss that Curtis ”50 Cent” Jackson once rapped about: as in ”take me to ecstasy without taking X-tasy.” I also kicked in some dough to start something called ego trip. I know you’ve heard of us/official Queensbridge murderers. We run rap when it comes to criticism, humor and race. And pretty ladies. Next Question.

In what way has the financial crisis effected TBM?
– We proud members of the Ted Bawno Ministries (TBM) LAUGH at the so-called financial crisis. All I have to say is this: if you are broke and broken, discover Bawnoi$m. Please join us. All of your problems will melt away like fat on a fat lady who is serious about Thai Bo.

What´s up with your obsession with rapper and the formerly co-owner of Source Magazine Benzino?
– I think that Raymond ”Benzino” Scott is a complex individual worthy of the cover of Complex magazine and I am proud to say that I have kept him relevant on the web and on the web of deceit we call rap. I also think his rapping is underrated and I also respect that he’s been getting money for a minute. Seventy percent of circa 1997 Source magazine money would be a good look right now. My HOPE is that Mr. Scott will join the TBM by year’s end. Because they say many important changes are to come in 2012 and it is in Mr. Scott’s interest to join us in preparation for WHAT’s NEXT.

He recently told website Ballerstatus.com that he´s looking to rekindle his old beef with Eminem. He says and i quote:
”Really now, I can consider myself a lyricist. I play with syllables, I use different flows, so now, it’s gonna be different, It’s gonna be a whole different situation, because I’m going to be going at him with a lyrical mindset. Not just saying things, trying to point out certain things. 2012, you can expect it.”
Any predictions on the outcome Ted?
– As far as Zno going after Eminem again? Anything is possible in this impossible world. Sadly, Zno taking Em out is as likely as Richard Nixon coming back as a zombie to eat Obama’s brains.

And that’s not very likely. What do you think about the state of hip hop right now?
– Hip hop is all about tight jeans and Drake rappin’ like a werewolf on American television. I miss rap when it was undeniably black, when guys like Lord Finesse, WuTang and Mobb Deep would wear gold teeth, openinly eat fried chicken AND sleep with white women. Now, everything is ”safe”. I want my rappers to snatch a chain before, during and AFTER the concert! Drake is too busy snatching a Sprite in-between songs. If Guru was still around he’d be tempted to slap the taste out his mouth. Like, ”obey your thirst for real rap, motherfucker!”

Haha, so who’s your favorite rapper then?
– Ghost is your host this evening. Ghostface Killah is the greatest rapper.

You got shot in ’98. What went down?
– I won’t speak on the ’98 shooting because I understand and honor the code of the streets. But I will say this: I come from the Curtis Jackson School of Revenge. Marinate on that.

Ok, let’s talk about money instead. You are the richest man on earth. What do you spend your cashflow on?
– I am very rich, yes this is true. How much money I have isn’t the issue, it’s how much money YOU don’t have that is the problem. Join the TBM TODAY!

Alright, do you do any charity work?
– As far as charity work, I try to give back as much as possible. I can’t take it with me, so I live life to the fullest. Some of the pretty ladies in my life are charity cases, but I treat them like beautiful ghetto flowers. And my money making techniques have taken many from being Bums to Billionaires. That’s the best give back, especially since I get 70 percent of their earnings. I mean, the Ted Bawno Ministries receives 70 percent of their earnings.

What does the future hold for TBM?
– The future is looking bright for the TBM. More and more people are converting to Bawnoi$m. We Bawnoi$t$ laugh at recessions. Speaking of which, I have the cure for male pattern baldness. Join the TBM and FIND OUT.

Do you have any last words for our readers?
– In closing, I would like to say ”TBM: All Day In Your Mouth. OPEN WIDE.”