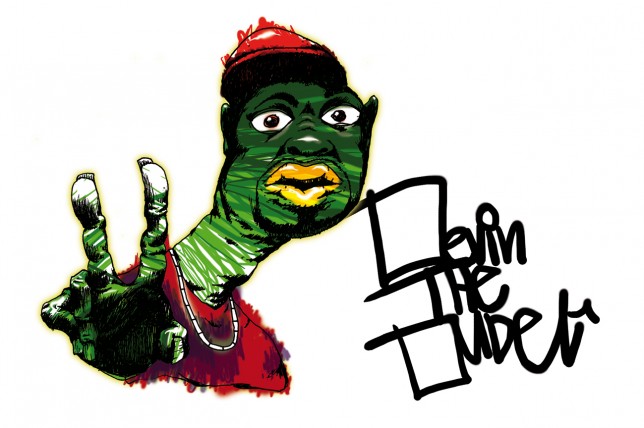 We sat down with Houstons finest to talk about his favorite spices of life….

First of all, do women see your lyrics as offensive?
Actually, it´s surprising to me man. That´s probably why i still kind of do it a lil bit because alot of the girls, they like that type of shit man!
You know, earlier i met this girl who approached me and she was like:
- Are you Devin The Dude? You do that song ”Fuckfaces”?
And i’m like yeah.
- I just love that song! When are you going to do something else like that? And i was like; i´m working on it! (laughs)

So you do it for the girls then?
Well, not really. You know kinda sorta but just to trip out. We always kinda had that type of vibe and we always had that subject matter pretty much from the beginning. It´s kind of what people expect when they listen to our music. But thats´s not all. There are other more serious songs as well.

A lot of your lyrics is about weed and women. Is that the most important things in your life?
Nah, it´s just some of the things that we do most of (laughing). It´s not the most important thing and it´s not the…(Forgets what he was tryin to say)
It´s much more than a high, it´s something different. The weed it´s just there during the time. It´s like a footballplayer and his equipment, yaknowwhatimsayin (laughs). He won’t play football without his equipment.

When did you start smoking weed?
I guess when i was around like thirteen maybe.

Do you remember the first time?
Yeah kinda, kinda.

What were you doing?
Well, my homeboys, umm a dude named Boomer and his brother Tony, they smoked. I used to fuck with them, you know like; -stop all this smoking man, that shit aint good for you maaan! (Making a funny annoying voice).
And they be like;
-Aww, you don´t know what you talk about man.  I was playing sports at the time and i was like; -you wont be able to run, you run slow and you won´t be able to play basketball, you won´t be able to do nuthin!
And he be like;
- ”Nigga, i can beat you runnin”.
I was like; -you crazy, come on let´s go!
Man, he was just swisssh (imitating flashing sound). I was ahead of him a little bit and he just passed me. I was like; -oh shit, man let me hit that!!! (Both laughing)

Did you feel like you got hooked on weed that day?
Nah. I never been hooked. I been smoking for 25 years and i ain’t been hooked! (bursts into laughter). Nah, it`s some sort of a medicine almost yaknow?
It can serve as a medicine, it can serve as clothing, it can serve as a lot of different things you know? Weed is not a ”quote on quote ” drug yaknowwhatimsaying?
It´s a controlled substance that ”they” (The goverment) control. They are not able to tax it so it´s hard to legalize it.

Do you have any bad experiences smoking weed? Like paranoia?
Ummm, not really. In highschool i always thought;
-I know they know i´m high. I wonder if they can smell it? I spray some of this shit on it.
Do they see my red eyes?
I always used to put visine in my eyes. But other than that nah! (both laughing)